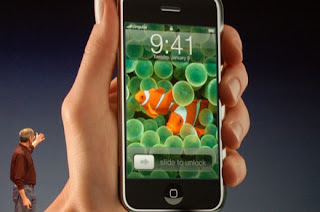 It's a mobile phone and iPod and a Black Berry style email client and has an internet browser as well.

The interface is patented and revolutionary as a touch screen interface that also understands gestures. You can view an image and gesture to enlarge it by touching the screen with your thumb and index finger and spreading them as you touch the screen. Awesome! 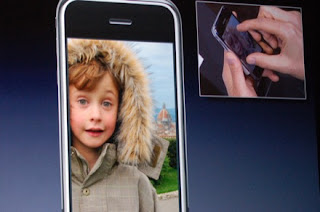 The phone has support from Yahoo, Google, Cingular and Bluetooth vendors.

Everyone is going to be buying one of these. It works with Macs and PCs and is actually running the Mac OS!
The device is also proximity aware and dims the screen as you bring the phone up to your ear.
You'll feel like you were gadget outfitted by James Bond's "Q" with this thing.
You'll feel like you time travelled from the future to the past walking around with it. It's just that cool!
Read more from Ed Burnette at zdnet.
Also here is some video from CBS:

¶ 2:16 PM
(0) comments
Thursday, January 04, 2007
Steve Jobs Executive Meeting predicts Apple IPhone
Wow! It's been a long time since I've posted. I've been really busy but that is no excuse is it.
Here is an article that caught my eye. It discusses what an Executive Meeting at Apple where Steve Jobs attends. It was contribute by David Sobotta who was formerly the federal sales manager at Apple. His blog is at viewfromthemountain.typepad.com/applepeels/

It's a very entertaining read.
Here's a quote I liked:
"Steve's ability to know where consumers and technology will intersect often creates a road paved in gold. That's why he'll focus his energy on mobiles. The potential there that only Steve can see could well turn into another must-have product for the legions who don't even know they are part of Steve's army. They haven't met him across a table. But they've met the products of his thinking." 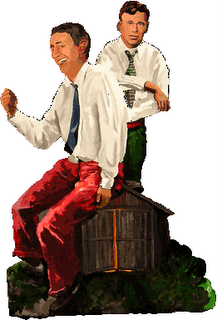 Here is an innovative marketing idea that realizes just how accustomed to technology we have become.

HP Founders Bill Hewlett and David Packard are sculpted into cardboard cutouts along with a picture of the Garage where they founded the company. A Cell Phone and a GPS were added so that the progress of the sculpture could be tracked.

Instructions were written on the back asking willing HitchHiker rider providers to help the travellers to their destination.

The progress of the journey could be tracked by Google Map.  ¶ 4:18 PM
(0) comments
Wednesday, June 14, 2006
This is just plain tech cool!
These guys have created a user interface that is very invocative of Steven Speilberg's "The Minoriy Report" and the scene where Tom Cruise plays a detective who is using a computer to solve crimes where the system user must use hand gestures and voice commands to operate the operating system.

In this case they use it with Google Earth and Warcaft.

Warcraft III and Google Earth on a Table - Google Video

Need to check this out later.  ¶ 4:13 PM
(0) comments
You can never have enough good Example Oracle Code:
I was glad to find this link today:
Oracle.Otnsamples.Oracle9ijdbc.Conncachesample.Conncachebean (Java2html)
You can start at the top from here:
http://www.oracle.com/technology/sample_code/tech/java/sqlj_jdbc/files/9i_jdbc/  ¶ 10:51 AM
(0) comments
Tuesday, March 21, 2006 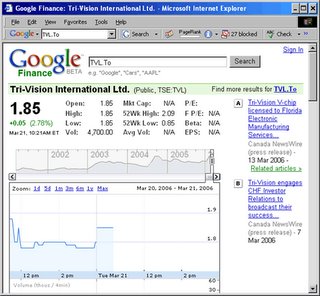 Google has launched their own Finance Site. It is similar to Yahoo! finance.

Now you can track your favourite stock. Even the Canadian ones like:
Google Finance: Tri-Vision International Ltd.

I've noticed in the past that some less known stocks or smaller companies are not well covered by some financial sites but Google Finance seems to treat all that I have tried equally well.

The Financial Chart is big and bold. And you are tempted to click on it just as you do with Google Maps.

And you'll be delighted to see that AJAX or Web 2.0 technology has been applied.

There is also great news coverage about your company of interest so I can see that Google's new Financial site could become a fast favourite with the Stock Watchers.

One of the really cool features is the marking of news events on the financial chart. So in other words the news stories are charted on the graph as well and demarcated by letters of the alphabet. It really lets you see how news and events effect a stock.  ¶ 12:22 PM
(0) comments
Thursday, March 16, 2006
Sky Showbiz - Exciting Star Wars News: "Star Wars fans, prepare to be thrilled.
The Force is getting a whole new lease of life in the shape of a brand new TV series.
Star Wars creator George Lucas has agreed to make 100 episodes, covering the years between prequel Episode III: Revenge Of The Sith and the first 1977 Star Wars movie.
Series producer Rick McCullum told the Daily Mirror: "We're very excited - we just got confirmation George Lucas has committed himself to writing the Star Wars TV series.
"I guess this is the news all fans have been waiting to hear."
But will any familiar faces be popping up in the TV shows?
None of the films' actors, from Ewan McGregor to Carrie Fisher, will be taking part. But Anthony Daniels, who played C3P0 will appear.
Rick added: "It will all be new because the originals will all be too old. But we will be using Anthony as C3PO because there is such a thing as loyalty."
George waited nearly 20 years before making the prequel films which star Hayden Christensen and Natalie Portman.
In the last prequel we saw Anakin Skywalker go to the dark side to become Darth Vader and the TV series will concentrate on the rise of his evil empire.
What we can't tell you though is which side the series will be on...
Looks like there'll be another kind of war to decide that."

Just great. Just when we thought we could safely go on with our lives.
The Star Wars story is about to enthrall us again but this time on our TV Sets.

You have to wonder about what drives successful people like George Lucas.

I guess the drive to be creative is very powerful. This is explained by Maslow's Hierarchy of Needs.